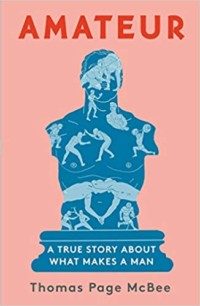 Thomas Page McBee was the first transgender boxer to fight in Madison Square Garden. Having transitioned from woman to man, he pursues the opportunity to fight in Madison Square Garden partly as an exploration to better understand what it means to be a man. In this memoir he records his experiences looking behind the veil of masculinity as he trains for the fight. Particularly sensitive to the physical, emotional and social changes involved in becoming a man, Thomas has a unique position to offer fresh insights into masculinity. He struggles to come to grips with his own masculinity while inhabiting one of the quintessentially masculine arenas, boxing. At one point he discusses the tension between having been a woman frightened of crossing paths with a man on a darkened street, and the realization that he now is the man on the darkened street that women are automatically wary of. Not immune to the pressures of socialization, he considers what it might mean to be a man while steering clear of toxic masculinity, which he acknowledges an unspoken pressure to conform to. Full of insights, I enjoyed following his path as he trains for the big fight, and as he tries to understand masculinity in our culture and in his own iteration of it. Highly recommended.