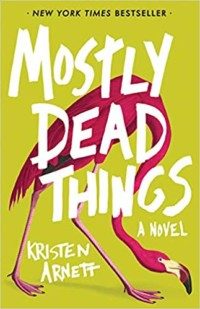 In this darkly humorous, southern gothic novel, a family deals with the death of their taxidermist father in differing ways. His daughter Jessa, the narrator of the story, prepares to take over his taxidermy business. Jessa’s mother begins posing the taxidermied animals in lewd ways as a form of coping with her husband’s death and the frustrations of their marriage. Jessa’s brother’s wife, whom Jessa also is in love with, walks out on them leaving them both grasping for something to make sense. This is humorous and quirky with a heavy dose of morbidity, full of zany characters and awkward moments. Imagine Jenny Lawson wrote Southern gothic novels, which she should definitely do. She might write something similar to this.