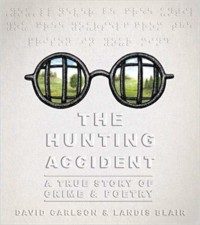 This is a graphic memoir about a young boy who goes to live with his dad, whom he hasn’t spent much time with since his parents divorce, after his mother dies. His dad is a blind poet and most of the story is about his secret life as a Chicago gangster blinded in a shootout and sent to prison. In prison, he becomes close to Nathan Leopold, of the infamous Leopold and Loeb. Leopold actually helps him come to term with his blindness. It’s a fascinating story illustrated beautifully by Landis Blair. The artwork captured incorporated elements of Braille in a way that was visually stunning. This is one of those stories that really demonstrates the power of the graphic medium to create a story that is absolutely unique, arresting, and could never be replicated with just prose. It’s also a story about how a boy and his dad learn to live with each other and understand each other after not being close and coming from two very different worlds. A very unexpected story that is brilliantly told.