The Plotters by Un-su Kim 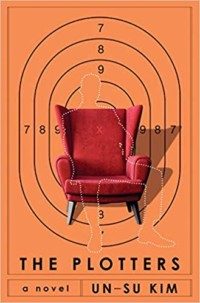 Who doesn’t fantasize about a library full of assassins? In this alternate version of Seoul, People called Plotters pull the strings, but no one really knows who the plotters are. They hire assassins associated with houses, similar to dojos, run by masters. Old Raccoon, one such master, lives in a house he has transformed into a library and reads books. One of his assassins, Reseng, who also reads books, has lived in the library since Old Raccoon found him in a dumpster when he was just a child. Raised to be an assassin, Reseng has obediently carried out his assignments without question, but trouble brews when he goes off script and he begins to see the cracks in the system. He picks at the cracks, but it may be that by doing so he has put himself on another assassin’s hit list.

I can’t help but think of Oldboy and Crouching Tiger, Hidden Dragon when reading the fight scenes. A sense of the inevitable paces the action making the fighting more about style and self-awareness than passion and brute force. Two assassins encounter each other knowing they are destined to fight. They talk shop, discuss their admiration for each other’s craft, then try to kill each other. Very civilized. It was enjoyable and a refreshing take on a book full of assassins.