**Update 9/4/20: All Kits Have Been Reserved. Please email Youth Services Librarian Kristin Starnes with any questions.**

The Kids Book Club is for kids who are reading beginning chapter books. The Fall 2020 At-Home Edition of the Kids Book Club features a monthly home delivery of the book club selection, craft supplies and directions, discussion prompts, and a bonus mail challenge. Available while supplies last. Books and supplies are provided by the Friends of the Library.

September 2020 Title: Dory Fantasmagory by Abby Hanlon. Also available as an audiobook and to download as an ebook.

As the youngest in her family, Dory really wants attention, and more than anything she wants her brother and sister to play with her. But she’s too much of a baby for them, so she’s left to her own devices–including her wild imagination and untiring energy. Her siblings may roll their eyes at her childish games, but Dory has lots of things to do: outsmarting the monsters all over the house, moving into the closet, and exacting revenge on her sister’s favorite doll. And when they really need her, daring Dory will prove her bravery, and finally get exactly what she has been looking for.

A sweet and hilarious chapter book about a boy and a bat, two unlikely friends who bond over loneliness, jellyrolls and Darth Vader. Daniel Misumi has just moved to a new house. It’s big and old and far away from his friends and his life before. AND it’s haunted . . . or is it? Megabat was just napping on a papaya one day when he was stuffed in a box and shipped halfway across the world. Now he’s living in an old house far from home, feeling sorry for himself and accidentally scaring the people who live there. Daniel realizes it’s not a ghost in his new house. It’s a bat. And he can talk. And he’s actually kind of cute. Megabat realizes that not every human wants to whack him with a broom. This one shares his smooshfruit. Add some buttermelon, juice boxes, a lightsaber and a common enemy and you’ve got a new friendship in the making! This charming, funny story is brought to life by Kass Reich’s warm and adorable illustrations. There’s never been a bat this cute — readers will be rooting for Megabat and Daniel from page one!

November 2020 Title: Juana and Lucas by Juana Medina. Also available as an audiobook.

Fans of Judy Moody and Clarice Bean will love Juana, the spunky young Colombian girl who stars in this playful new series. Juana loves many things: drawing, eating Brussels sprouts, living in Bogotá, Colombia, and especially her dog, Lucas, the best amigo ever. She does not love wearing her itchy school uniform, solving math problems, or going to dance class. And she especially does not love learning the English. Why is it so important to learn a language that makes so little sense? But when Juana’s abuelos tell her about a special trip they are planning one that Juana will need to speak English to go on, Juana begins to wonder whether learning the English might be a good use of her time after all. Hilarious, energetic, and utterly relatable, Juana will win over los corazones, the hearts of readers everywhere in her first adventure, presented by namesake Juana Medina.

December 2020 Title: Big Foot and Little Foot by Ellen Potter. Also available to download as an ebook and as an audiobook on CloudLibrary. Nominee for the 2020-2021 Beverly Cleary Children’s Choice Award.

Hugo is a young Sasquatch who longs for adventure. Boone is young boy who longs to see a Sasquatch. When their worlds collide, they become the unlikeliest pair of best friends. At the Academy for Curious Squidges, Hugo learns all manner of Sneaking–after all, the most important part of being a Sasquatch is staying hidden from humans. But Hugo dreams of roaming free in the Big Wide World rather than staying cooped up in caves. When he has an unexpected run-in with a young human boy, Hugo seizes the opportunity for a grand adventure. Soon, the two team up to search high and low for mythical beasts, like Ogopogos and Snoot-Nosed Gints. Through discovering these new creatures, together, Big Foot and Little Foot explore the ins and outs of each other’s very different worlds but learn that, deep down, maybe they’re not so different after all.

Jasmine Toguchi, wants to do something before her older sister for once. So when her family comes to visit for New Year’s, she sets her sights on pounding mochi, traditionally a boys-only job. 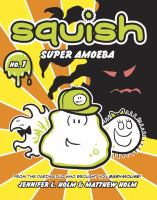 Squish, a meek amoeba who loves the comic book exploits of his favorite hero, “Super Amoeba,” tries to emulate him when his best friend is threatened by a bully. 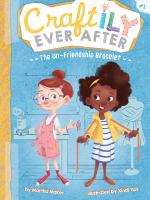 Craftily Ever After: The Un-Friendship Bracelet by Martha Maker

Emily Adams, Maddie Wilson, Bella Diaz, and Sam Sharma are eight-year-olds with one special thing in common: they love to design, build, and create. In the first book of this new chapter book series, a new student gets between eight-year-old best friends Emily and Maddie–and changes the meaning of their friendship. Will their friendship last and can they make room for others?

Nine-year-old Hilde Lysiak is an aspiring reporter with her own newspaper, the Orange Street News, and she is investigating break-ins and missing baked goods–and with the help of Zeus, a little dog with a big bark, she intends to track down the thief who is trying to steal a win in the Bake-Off Bonanza, one of Selinsgrove’s biggest events.

Diary of a Pug: Pug Blasts Off by Kyla May

June  2020 Title: Diary of a Pug: Pug Blasts Off! by Kyla May. Also available to download as an e-book.

Baron von Bubbles, aka “Bub,” is the self-proclaimed cutest pug on the planet! Things he loves: fashion, peanut butter, and his human, Bella. Things he does NOT love: Nutz the squirrel, baths, and the rain. When Bella enters the Spirit of the Inventor Challenge, Bub helps her craft the best project ever. But what happens when Nutz gets on Bub’s nerves and makes him ruin Bella’s project? If Bub wants to make it up to his girl, he’ll have to stand up to Nutz — and the rain — once and for all. With four-color artwork throughout, this funny and charming diary-format chapter book is perfect for anyone who believes a furry pal is the best kind of friend.

The Infamous Ratsos by Kara LaReau

July 2020 Title: The Infamous Ratsos by Kara LaReau. Also available to download as an e-book.

Louie and Ralphie Ratso’s dad, Big Lou, always says that there are two kinds of people: those who are tough and those who are soft. Louie and Ralphie are tough, tough, tough, just like Big Lou, and they’re going to prove it. But every time they try to show just how tough they are, the Ratso brothers end up accidentally doing good deeds instead. What’ll Big Lou do when he finds out they’ve been acting like softies all over the Big City? Perfect for emerging and reluctant readers, this clever and surprisingly warmhearted chapter book shows that being tough all the time can be really tough.

Princess Cora and the Crocodile by Laura Amy Schlitz

August 2020 Title: Princess Cora and the Crocodile by Laura Amy Schlitz. Also available as an audiobook and dvd.

Princess Cora is sick of boring lessons. She’s sick of running in circles around the dungeon gym. She’s sick, sick, sick of taking three baths a day. And her parents won’t let her have a dog. But when she writes to her fairy godmother for help, she doesn’t expect that help to come in the form of a crocodile–a crocodile who does not behave properly.

Watch the trailer for Diary of a Pug: Pug Blasts Off! by Kyla May.

Listen to a sample from The Infamous Ratsos by Kara LaReau: